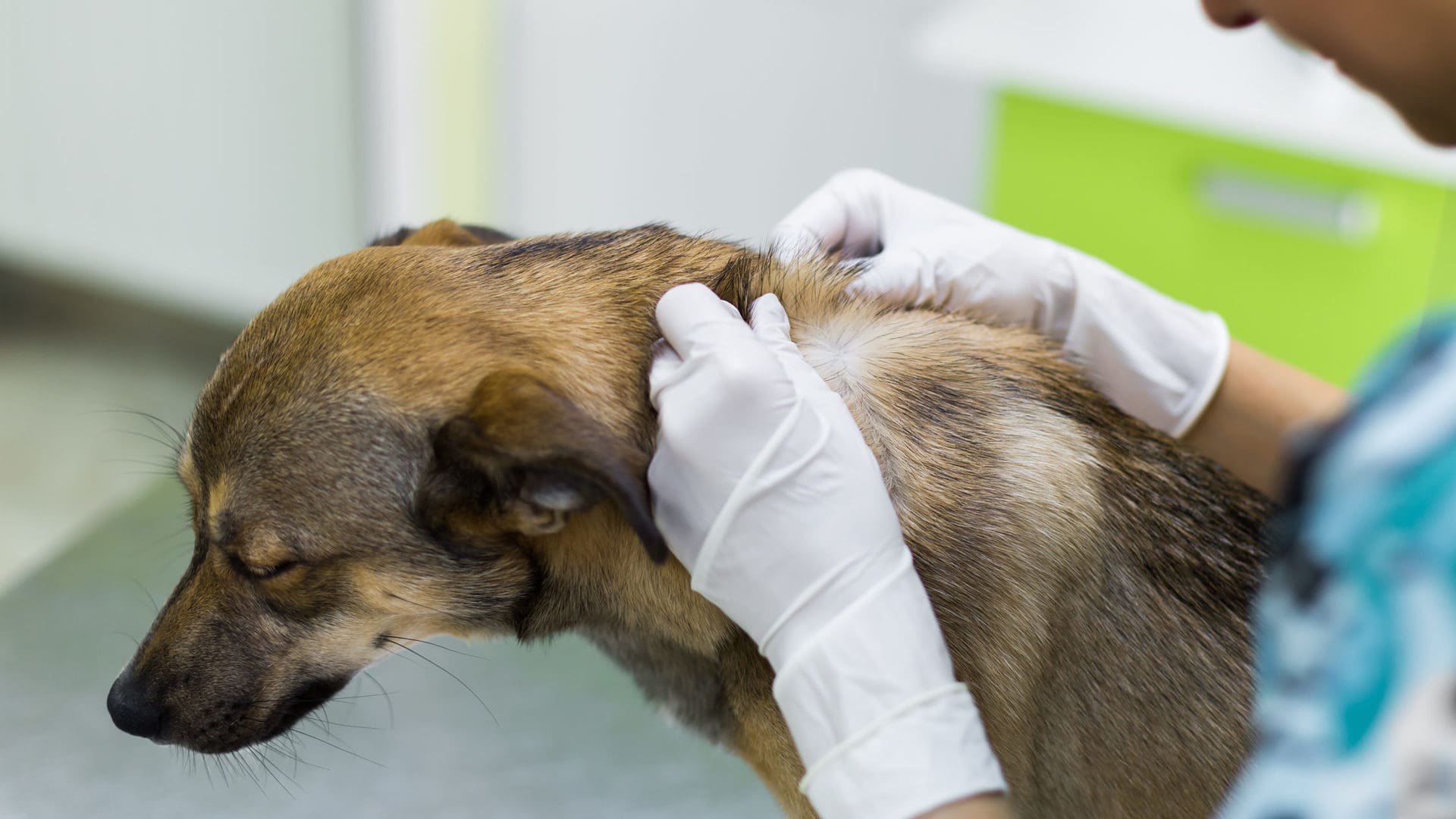 Unbeknownst to many pet owners, parasitic infections in dogs are quite common. A wolf worm infestation or Cuterebra are parasitic larvae laid by botflies that infect hosts at dogs. These botflies can be found throughout North America, Central America and parts of Canada and Mexico and are called wolf worms in the larval stage.

What Are Wolf Worms (Botflies) in Dogs?

Wolf worms, also known as Cuterebra or Warbles, are the larval form of botflies. A wolf worm causes a small lump to appear on a dog and requires veterinary care and a CT scan in rare cases where there is unhealthy tissue or a growing breathing hole.

Many species of botflies are found all over the continental United States, including some parts of southern Canada and Northeastern Mexico.

These larvae are opportunistic parasites that can infect dogs, but their preferential hosts are rabbits. Infection is relatively common and is usually seen in the late summer or early fall.

Where Do Botflies Come From?

Adult botflies will lay their eggs in areas where animals frequently traffic, such as rodent nests or rabbit burrows. The female will lay anywhere from 5-15 eggs at a time.

Animals including dog breeds become susceptible to infection when they move through areas where eggs have been laid by a bot fly. The body heat of the animal leads to the eggs hatching. Once hatched, the larvae will enter the body through the nose, mouth, or open wounds.

Once the larvae have entered the body and lay eggs, they will migrate to various locations on the body, typically just under the skin. Wolf worm have an interesting life cycle. Eggs laid by bot flies turn into larvae in 12-21 hours after the eggs hatch.

After a month of development, the larvae will leave the host by exiting the breathing pore and then will pupate in the soil.

Before we can get into how to treat wolf worm bites, we have to look at wolf worm symptoms which include:

Dogs can also develop upper respiratory signs apart from physical signs on the dog’s body that include:

Though rare, dogs can also develop neurological signs and will then require intensive care by a vet. These indicate a vet emergency and dogs displaying any of these behaviors need to be evaluated ASAP, along with a manual removal of botfly eggs.

These symptoms should alert you that the botflies lay eggs requires vet care. They include:

How do Vets Diagnose Wolf Worms (Botflies) in Dogs?

Diagnosis of wolf worms is typically through suspicion and worm identification on your dog’s skin. Your veterinarian will take a thorough history and examine lesions of concern.

A definitive diagnosis is made when the larva is identified. Typically, this is done via the removal of the worm.

How to Treat Wolf Worms (Warbles) in Dogs?

Treatment of wolf worms includes manually removing the worm and addressing the wounds.

Any lesion on your dog’s skin from a wolf worm that you suspect to have a Cuterebra should be examined. A veterinarian may use special tools to enlarge the breathing pore. These worms are smart and may retreat further under the skin once probing is performed.

Covering the hole with petroleum jelly will start to suffocate the worm. They will then migrate toward the surface and make removal easier. A veterinarian may use forceps or tweezers to snag the worm and remove it in one piece.

Appropriate care should always be taken with manual removal because if the larva ruptures, anaphylaxis can occur. For the same reason, wolf worm skin lesions should not be squeezed or traumatized. Squeezing the skin can cause the worm to rupture.

Diphenhydramine (antihistamine medication) may be administered to reduce the risk of an allergic reaction.

Dogs with signs of nervous system infection can be challenging to diagnose. Removal of the larvae is extremely difficult and sometimes impossible.

Veterinarians will tend to reach for medical management of the condition with ivermectin (to kill the parasite) and corticosteroids plus diphenhydramine to reduce inflammation and the risk of allergic reaction.

If all parts of the wolf worm are not removed from the animal skin, which is fairly rare, but dogs can develop foreign body reactions or chronic secondary infections.

Once the wolf worm is removed from the animal, the lesion should be flushed with sterile saline and left open to heal.

Recovery From Cuterebra in Dogs

The prognosis for dog botfly larvae infections is usually very good. Healing can be slow for dogs that have lesions from Cuterebra.

The hole does not need to be covered and will gradually heal by second intention. If there is any evidence of infection present, your veterinarian may prescribe antibiotics.

Poor wound healing, recurrent draining, or ongoing infections may be a sign that the worm was not removed entirely, or that foreign material was left behind. These wounds may need to be debrided and surgically addressed.

The prognosis for recovery may be worse for dogs that have systemic signs of infection or neurological infections.

How to Prevent Warbles in Dogs?

Prevention of dog botfly larvae can be challenging. It is important to keep dogs away from rodent nests in the yard.

Monitor your dog’s skin regularly and have any new lumps or bumps evaluated by a veterinarian.

How do you get rid of wolf worms?

Wolf worms are treated by manually removing the larvae from the skin. This should always be performed by a skilled veterinarian as improper technique can lead to severe allergic reactions. Neurological or ocular infections require treatment with ivermectin, diphenhydramine, and corticosteroids.

How Big Do Wolf Worms Get?

The mature larvae can grow to become 3cm in size.

What Do Wolf Worms Turn Into?

Worm worms are Botfly larvae. Once their maturation process is complete within the host, they will leave and pupate within the environment. After several months to years, an adult botfly will emerge.

Can Dogs Get the Flu?

10 winter activities your dog will love

Can Dogs Get the Flu?

10 winter activities your dog will love